History of pizza: from Italy to your table

We don’t want to say pizza is humankind greatest invention, but we certainly have thought about it. A delicious dough, sometimes crunchy, sometimes spongy, with that traditional oven flavour, and any ingredients you can think about and, if that is not enough, add cheese: it is hard to be closest to perfection. But, does pizza really come from Italy? When did people begin to eat pizza? We share with you the history of pizza in a few words:

Does pizza come from Italy?

As far as anyone knows, yes, there are records of food like pizza from the Roman Empire. Maybe family matters in Ancient Rome could have been a reality show these days, but the truth is we owe them more inventions than to Edison —and probably, intending to improve others life more than Edison did— and, surprise, a primitive pizza is among them. This can indeed be a bit like discussing who invented the sandwich by putting two slices of bread with something in the middle, but the records talk about a kind of flat bread with pieces of food all over it (local food, a sustainable type of cooking, you see). That also means the most probable topping would have been oil and olives. 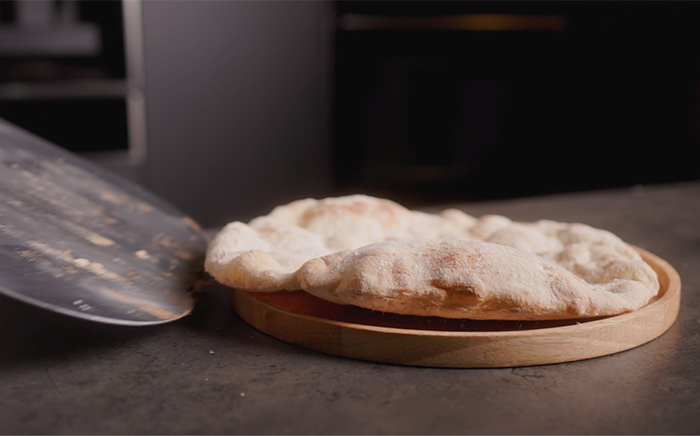 We know they baked this bread, if not at the bottom of the ovens, the closest to that part. The panis focacis become later the focaccia, sometimes unfairly identified with a sort of poor cousin of the noble pizza, but focaccia is a tasty and delicious dish. Anyway, these pre-pizzas were sold during gladiator battles paying just one denarius and a half for a pizza slice. We have made up that fact, but it was just to check that you were still focused on the text.

The history of pizza has also seen very similar dishes in Greece, Persia, and of course, Egypt, where the oven was part of everyday life, and so was the bread; but Italy takes the credit for authenticity, particularly one region: Etruria. 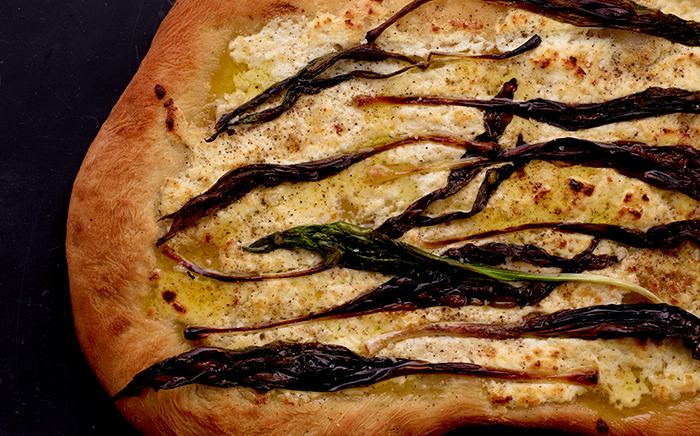 The Roman pinsa is another ancestor of the pizza, and it comes from the Roman Empire too. For those who thought that Romans only ate bunches of grapes while lying down on a triclinium (yes, that kind of couch), you need to know roman gastronomy has a lot of substance, like a good pizza recipe. At first, though, the main purpose of the pinsa was to be a tray to put the food on it. Eventually, it became the crunchy and spongy dish we know today with its typical oval shape. Hard to believe, but pizza and its ancestors were not always a main dish on the table.

Pizza was born in Naples

Actually, re-born in Naples. The history of pizza takes us to the south of Europe. However, the most probable thing to happened was that pizza was recovered and became popular due to the working and poor classes, like most of the dishes we enjoy these days. Hunger boost creativity. We travel to the XVIII century, and the pizza has already one of the most iconic ingredients: tomato sauce. This ingredient was not in Europe until the conquers brought it from America during the XVI century. Pizza was cheap, street food, but filling and nutritious. The first pizza restaurant opened in Naples around 1831, and it remains open. 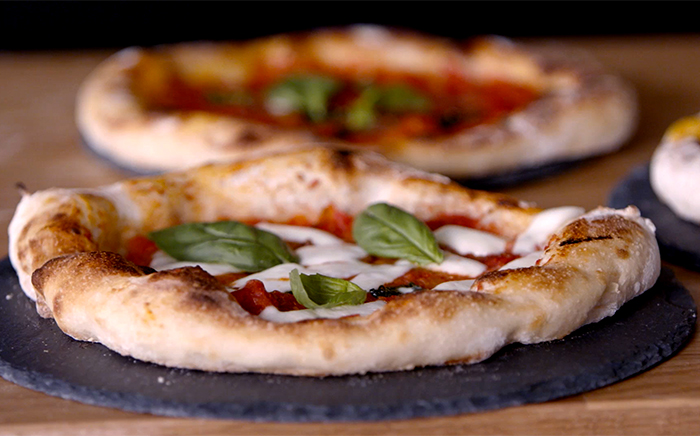 How Margherita pizza was born

One of the most iconic pizzas was born in Naples, and it has even a royal —not sure if real— anecdote. Looks like this pizza was born at the end of the XIX century in the city. A pizzaiolo —a pizza master— created it to honour the visit of King Umberto I and his wife, Margherita. From all the pizzas they tasted, the queen chose her favourite, and it became Pizza Margherita. This is a pizza with tomato, mozzarella, and basil, the colours of the Italian flag (the country was united again a few years ago). The point here is a good pizza does not need many more ingredients to taste delicious. 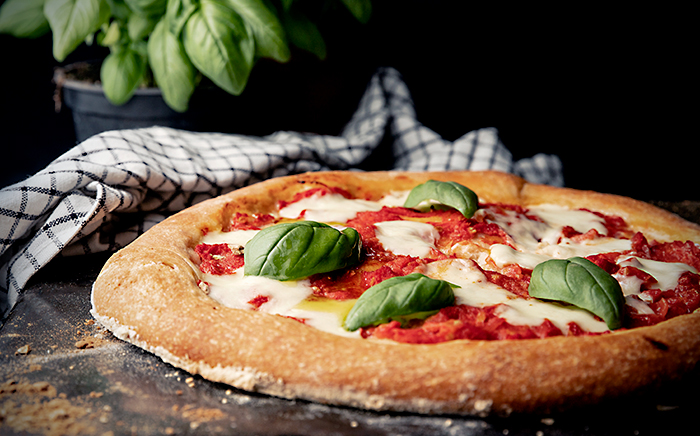 At the beginning of the XX century, pizza was well-known in all the social classes, and it was also popular in many Italian areas. Those regions developed their own local pizza recipe, like Roman pizza (crunchy, with a very thin crust), Neapolitan pizza (with puffy sides, rustic), or the Sicilian sfincione (between pizza and focaccia). But there are many other local pizzas, as you can guess.

There are pizza associations founded to preserve pizza recipes integrity. Also, to say what is pizza and what is an affront to pizza morality (yes, put fruit over it is not ok). 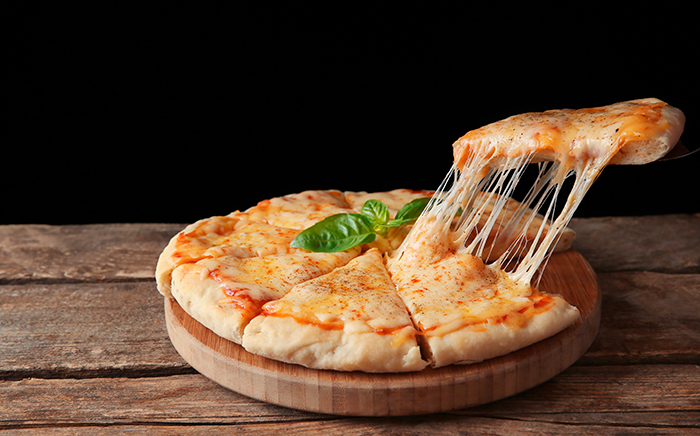 The XIX century means massive immigrations and a significant step in the history of pizza. Italian immigration to the U.S.A. was huge, and you can see a bit of history represented in films like The Godfather II (1974). The first Italian pizza restaurant opened in New York in 1905. But it was after the II World War that pizza became well-known all around North America. Italian Americans helped to make pizza popular. Frank Sinatra loved it and had a couple of favourite places in New York to eat pizza. But many soldiers had already tasted pizza during the war in Europe. They helped to make it popular when they came back home.

The U.S.A. finally created different pizzas recipes. Some of them became classical pizzas and, in that way, people also tasted other dishes from outside their country borders. We can find pizzas Chicago style —thick and crunchy—, New York style —huge and thin—, Detroit style —square pizza— California style —thin, with local ingredients— and yes, Hawaiian pizza too (evil laugh). The development of pizza restaurants eventually turned into big franchises with pizzas of different qualities and prices.

South America: the other life of the pizza

The other big area where Italian immigration arrived was South America, Argentina specifically. At the end of the XIX century, pizza arrived too, and in the middle part of the XX century was very popular in many cities. Pizza travelled to Chile, Colombia, Uruguay or Mexico, where you can find many local recipes, and the rest of the south, until being one of everybody’s favourite dishes, with top quality ingredients, far away from any fast-food of the large pizza franchises, and with pizza masters well-known outside America.

The history of pizza continues and we can talk these days of a healthy dish with high-quality ingredients that we can cook at home, and now, with a restaurant-quality result thanks to MaestroPizza oven. In this ode to pizza, we bet you can’t find anybody who does not like it, really, go on, try. Pizza is that thing that improves everything, from a game or match to a bad movie or the pause during a moving day. Life without pizza —and music, yes— will still be life, but sadder.

How many coffee varieties can we find?

10 common Christmas meals mistakes and how to fix them

5 secrets for cooking tender and juicy meat in the oven

5 Kitchen appliances for small spaces to make your life easier