Mastering the secrets of Japanese cuisine takes years and effort. It has precise cooking techniques, full of small nuances. So we do not mean to make you an expert from head to toe: we will just try to teach you a bit about this cuisine and explain what teppanyaki is.

The word teppanyaki is built around two different names: teppan, meaning iron plate or griddle, and yaki, meaning something grilled or boiled. Altogether, it is like “grilled or cooked on a griddle“. In Japan, teppanyaki is also used to talk about some dishes made on a griddle, like yakisoba (fried noodles) or monjayaki (a dough with several ingredients with a sort of melted cheese texture).

Performances and tricks are part of the teppanyaki’s professional chefs work at the restaurants. They can even put food straight from the working surface into the guests’ mouths or crack an egg in the air (successfully, most of the time, do not worry). 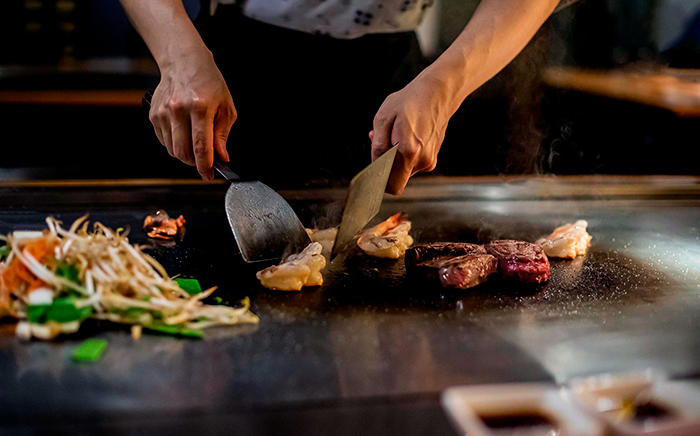 But performance aside, teppanyaki cooking, like most Japanese techniques, is a cuisine that is extremely tasty and healthy, because you can cook with little fat and a lot of flavour.

The origin of teppanyaki is not very old. Teppanyaki technology itself is more or less modern. Influenced by some western cuisine, the restaurant chain Misono, from chef Shigeji Fujioka, introduced this type of dish in 1945. In the beginning, it was an okonomiyaki restaurant, but at the end of the Second World War, it became famous among North American officers.

With immediate success, the restaurant serves not only officers but also tourists, attracted to the delicious dishes but also looking for the chef’s performances, which make this cooking closer and almost familiar. The restaurant chain performed more and more complicated acrobatic performances every time.

Teppanyaki became popular in 1964 when the North American chain Benihana, under the chef Hiroaki Aoki began using it. Currently, they have more than 80 restaurants in the U.S.A. 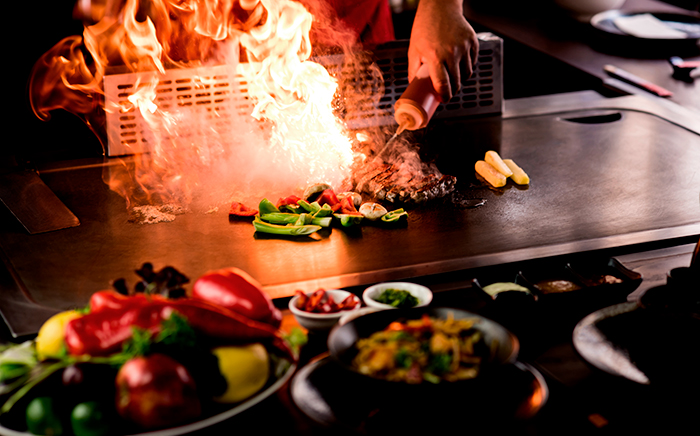 These two types of cooking methods are usually confused because there are just minimal differences. Both use the griddle for cooking the food, but teriyaki uses the sauce of the same name too. Teriyaki sauce is made out of soy, sugar, mirin and sake. These last two ingredients are rice liquors. Meanwhile, mirin is soft, and sake is closer to brandy or any strong alcohol.

To make the teriyaki sauce: put all the ingredients together over low heat until they thicken. When ready, use it to soak the food into it and cook it later on the griddle. Another option is to put the food inside and marinade it for the whole night. Then, just cook them on the hot griddle.

What type of food is good for teppanyaki? 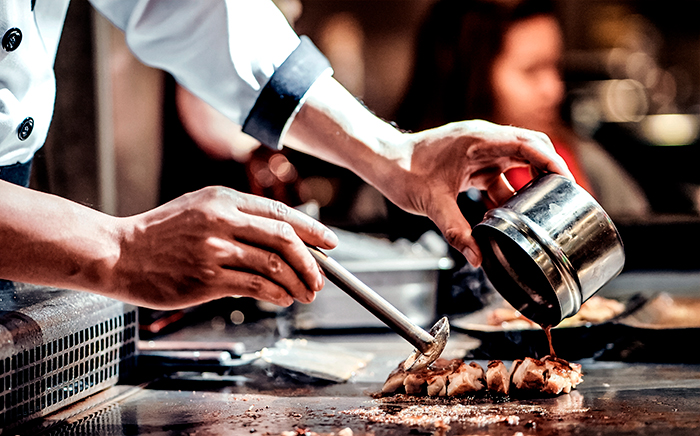 The ingredients are cut very well to cook them better and properly without getting burnt. In this way, you will have a tasty meal in minutes. The most common foods for teppanyaki are veal, escalopes, chicken, lobster, prawns, and other seafood, such as shrimp or octopus. Soy sauce is the common dressing, or sesame seeds. These are the most typical ingredients, but eventually, if you want to go deeper with this technique, you will have to go further and innovate with other foods and methods.

We don’t want to end this post without a few brief tips to help you when you begin to cook with this Japanese cooking method:

It is an easy method for beginners, if you do not go further into acrobatic skills, and a healthy and delicious way to eat. But again, pay attention to sauces because they can be the key to a successful meal.

Why a wine cooler in the kitchen is a good idea

5 Kitchen appliances for small spaces to make your life easier

How to clean and disinfect your kitchen sink easily

Why do we decorate pumpkins on Halloween?

Why a wine cooler in the kitchen is a good idea

Infinity G1 Edition: innovation and elegance in your kitchen and on your table